Orangutan by The Bowl and Pie Bird 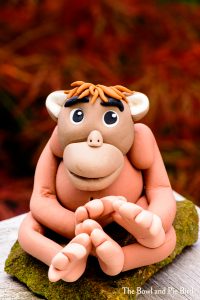 Which animal did you make?

An orangutan. The name orangutan comes from the Malay language: “or-ang” meaning person or people and “u-tan” meaning forest. So, quite literally, “Person of the forest”.

Where does the orangutan live?

Wild orangutans live only on the islands of Borneo and Sumatra in Southeast Asia. In 2017, a new, third species living in North Sumatra, the Tapanuli orangutan, was discovered.

What does the orangutan eat?

Orangutans have a varied diet: 60% fruit, 25% young leaves, 10% flowers and bark and 5% insects (e.g. ants, termites, crickets). Young orangutans learn to eat by observing their mother and being allowed to take food from their mother’s mouth or hands.

What makes this animal so special?

We best know these animals for their characteristic red fur. These incredible animals are well adapted to living in the rainforests and are the largest arboreal mammal, meaning that they spend most of their time in trees. They have long, powerful arms and their grasping hands and feet allow them to move swiftly and safely through the forest. These great apes share nearly 97% of our genes and are highly intelligent, especially when it comes to problem solving. They are also called “gardeners of the forest” as they play a vital role in spreading seeds in their habitats.

Orangutans are under threat by us humans entering their homes and cutting down trees mainly for palm-oil plantations, but also for logging. They are also killed if they wander into agriculture plantations in search of food – as they can’t find enough in their ever decreasing forests.